Ganglions of the Wrist 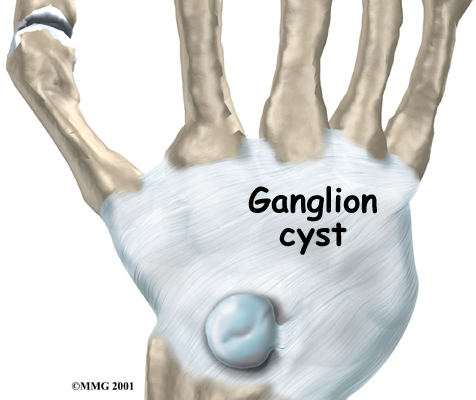 A ganglion is a small, harmless cyst, or sac of fluid, that sometimes develops in the wrist. Doctors don't know exactly what causes ganglions, but a ganglion that isn't painful and doesn't interfere with activity can often be left untreated without harm to the patient. However, treatment options are available for painful ganglions or ones that cause problems.

This guide will help you understand:

What parts of the wrist are involved?

The anatomy of the wrist joint is extremely complex, probably the most complex of all the joints in the body. The wrist is actually a collection of many joints and bones. These joints and bones let us use our hands in lots of different ways. The wrist must be extremely mobile to give our hands a full range of motion. At the same time, the wrist must provide the strength for heavy gripping. 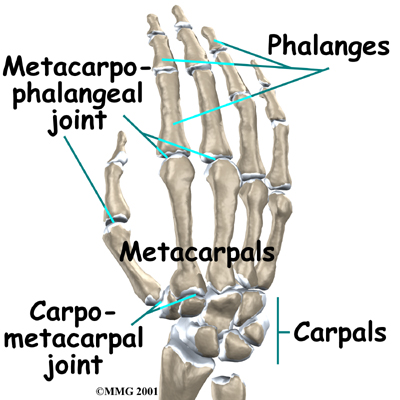 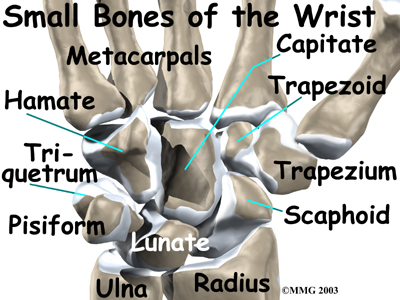 Ligaments connect and hold all these wrist bones together. 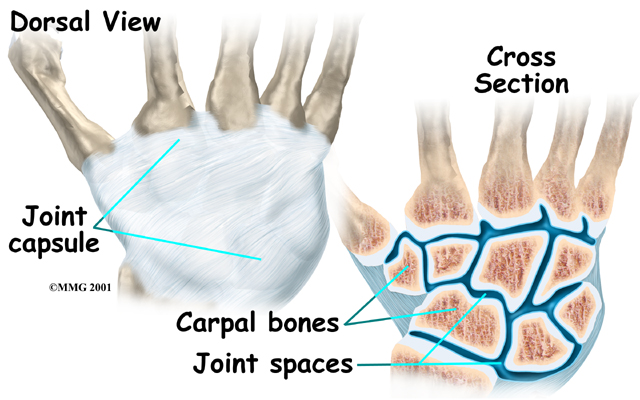 Ganglions are generally attached by a stalk of tissue to a nearby joint capsule, tendon, or tendon sheath (tissure covering the tendon). 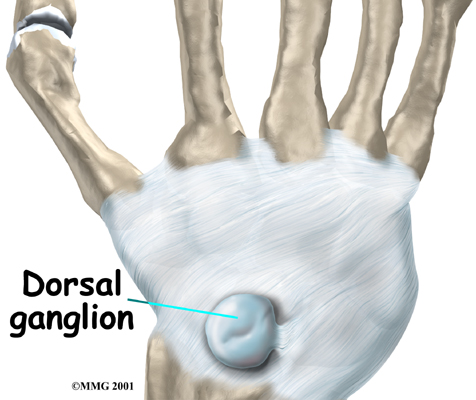 Wrist ganglions are attached to the wrist joint capsule. Typically only one ganglion appears, often in a location that is predictable to doctors. However, ganglions have been seen in almost every joint in the hand and wrist. 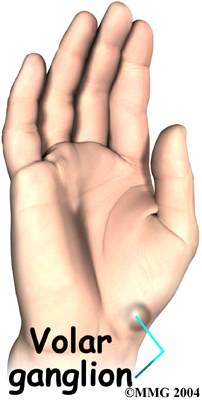 Why do I have this problem?

Doctors don't know why ganglions develop. In some cases, the wrist has been injured previously. Repetitive injuries, such as those that can occur from playing tennis or golf frequently, seem to play a role in ganglion development as well.

One theory suggests that wrist ganglions are formed when connective tissue degenerates or is damaged by wear and tear. The damaged tissue forms a weakened spot in the joint capsule, just like a weak spot on a car tire that allows the inner tube to bulge through. The joint fluid may escape through this weakened area and begin to collect in a cyst outside the joint. Over time this cyst grows larger. The joint fluid seems to move out of the wrist joint into the ganglion, but not the other way. In the end, a clear, sticky fluid fills the cyst. The fluid is a mix of chemicals normally found in the joint.

A patient with a dorsal wrist ganglion may feel a bump or mass on the back of the wrist. With a volar wrist ganglion, the bump is felt on the wrist crease below the thumb. The mass may appear suddenly, or it may develop over time. The ganglion may occasionally increase or decrease in size.

The wrist may ache or feel tender. The ganglion may also interfere with activities. A volar wrist ganglion may compress the median or ulnar nerve, causing trouble with sensation and movement. An occult dorsal wrist ganglion may be quite painful and tender, even though it is smaller than other ganglions. Typically the symptoms from a ganglion are not harmful and generally do not grow worse. These cysts will not turn into cancer. 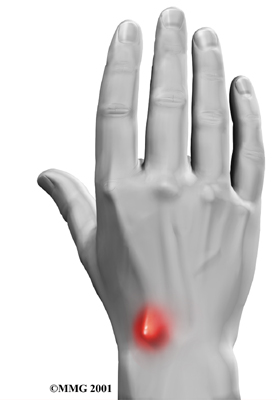 How do doctors diagnose the problem?

Your doctor will ask for a history of the problem and examine your hand and wrist. Usually, this is all that's required to diagnose a ganglion. An occult dorsal wrist ganglion, however, may be more difficult to locate because of its small size.

What can be done to treat a ganglion?

Treatment for dorsal and volar wrist ganglions may be either surgical or nonsurgical. The relative risks and benefits of any ganglion treatment should be considered carefully.

In the past, dorsal wrist ganglions were treated by breaking them without rupturing the skin. This was done with a mallet (or bible) or simply with firm pressure. However, because ganglions often reappeared after this type of treatment, it is no longer used.

Observation is often sufficient treatment for wrist ganglions. Ganglions typically are harmless and usually do not grow worse over time. Nor do they usually cause damage to the tendons, nerves, or the joint as a whole. As many as 50 percent of wrist ganglions may eventually go away by themselves.

Beyond observation, closed rupture with multiple needle punctures is another nonsurgical treatment option for dorsal wrist ganglions. In this procedure, the cyst wall is punctured with a needle, and anti-inflammatory and numbing drugs are injected into the cyst. This treatment can shrink the cyst and alleviate symptoms. However, the ganglion is likely to reappear.

Observation is the most common nonsurgical treatment for volar wrist ganglions. 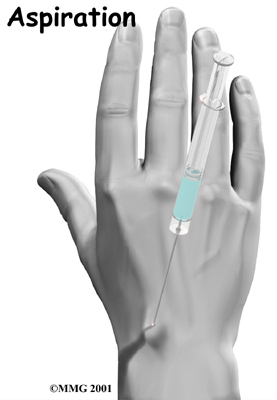 Surgery is recommended when the patient feels significant pain or when the cyst interferes with activity.

It is also recommended if the ganglion is compressing nerves in the wrist, since this can cause problems with movement and feeling in the hand.

Surgery is usually done using regional anesthesia, which means only the arm is put to sleep, but it can also be done under a general anesthesia in which you go to sleep.

The first is cyst puncture and aspiration. (Aspiration means drawing the fluid out with suction.) However, this procedure has less than a 50 percent success rate.

Excision, or removal, of the cyst is the second option.

Removing the cyst is usually effective if the stalk that connects the cyst to the joint capsule and a bit of the surrounding capsule are removed.

Usually only a single incision is made, but depending on the location of the ganglion, a second incision may be necessary.

To remove a dorsal wrist ganglion, a small incision is made in the back of the wrist. The tendons that run across the back of the wrist and into the fingers are retracted (or moved) out of the way. This allows the surgeon to see the ganglion and follow it down to where it attaches to the wrist capsule. Once the surgeon locates this stalk, the entire ganglion is removed, including the area where it attaches to the joint capsule. The joint capsule may or may not need to be repaired with sutures. Finally, the skin incision is closed with sutures. 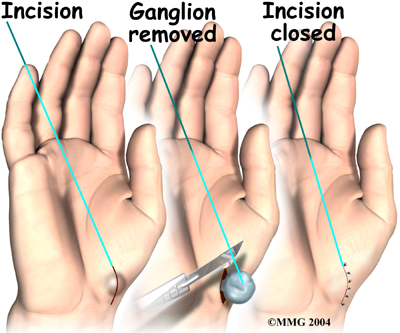 Puncture and aspiration is not recommended for volar wrist ganglions located in certain areas because of the possibility of nerve and blood vessel damage. In other areas, needle puncture has a better success rate.

Excision is the most common surgery for a volar wrist ganglion. Removing the cyst  is usually effective if the stalk that connects the cyst to the joint capsule and a bit of the surrounding capsule are removed. The surgical procedure is basically the same, except the volar ganglion is usually very close to the radial artery (the artery in the wrist used to feel someone's pulse). In some cases, the volar ganglion even winds around the artery. This makes removing the ganglion a bit more difficult. The surgeon must be careful to protect the artery, while at the same time removing the cyst down to the joint capsule, just like with the dorsal ganglion.

Both of these procedures have risks. Even after excision surgery, a ganglion may reappear, though this is uncommon. There is a slight risk of infection with both procedures. Excision can sometimes result in decreased motion, instability, and nerve or blood vessel damage. Removing a volar ganglion has a greater risk of nerve and blood vessel damage. However, the vast majority of people have two arteries that travel into the hand. If one is injured, the other is sufficient to provide an adequate blood supply to the hand.

A bulky dressing is applied to the wrist and forearm. You will be encouraged to move your fingers and wrist soon after surgery. Stitches are removed after two weeks. Physical Therapy exercises should be continued until you can move your wrist normally.

You may simply be asked to observe the ganglion for changes. When you visit Gemini Physical Therapy Spine & Sports Rehabilitation, our therapist may issue you a splint to keep your wrist from moving and to allow the ganglion to shrink. We can show you how to massage the area in order to move fluid out of the ganglion. If you find that the ganglion has gotten bigger, notify your doctor.